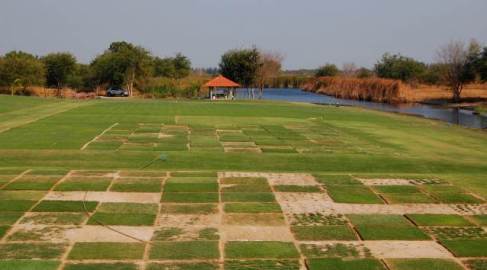 Evaluation of turfgrass varieties being conducted at the Asian Turfgrass Center’s research facility near Bangkok.

A more accurate heading for this article would be: Grain – How to Read, but that doesn’t grab attention. Yet the correct reading of grain is absolutely vital if one is to putt well – especially so in Thailand, Central and Southern Thailand in particular. Oh, and it should go without saying that the Rules of Golf forbid testing the putting surface.

Ever wondered why certain putts didn’t behave the way you expected? Why some greens appear very fast, yet one hole later their pace becomes significantly slower? What is it about putting surfaces in Thailand compared to the temperate climates of much of Europe, North-east Asia, Canada and Northern USA?  The one-word answer is grass.

Golf course architects, if they were able, would use grass types that have the thinnest of blades and grow straight up, thus eliminating the effect of grain. Unfortunately, for them and this blog site’s notional golfer – Freddie the Farang, course architects need to bow to the demands of climate. The grass type used will depend upon the location’s average temperature (during day and night), rainfall, amount of sunlight hours, soil type, size of maintenance budget and so on. The grass commonly found in warm climate zones, such as Pattaya, is Bermuda grass (or one of its hybrid relatives). With Bermuda grass comes….. grain, grain mak mak.

Grain refers to the direction the grass grows, or more precisely, the angle at which the blades of grass tend to lie. Grain can and does have a huge impact on the speed of the putt. It will also influence direction. Some courses around Pattaya, such as Bangpra and Emerald, are more “grain obvious” than others. Whereas courses with thinner-bladed grasses on their putting surfaces, such as Mountain Shadow, Crystal Bay and Khao Kheow, have grain that is less apparent to the naked eye – but is there nonetheless.

Picture your dilemma: you are playing the 6th at Bangpra – you know the straight-ish par-4, OB left, with an uphill second shot that normally needs to clear a centre-front bunker. It’s also stroke-hole 1. Imagine the pin is front-left and your approach shot has left you with a 25-foot putt that you can see is slightly downhill. Your caddie gives you a somewhat grave look and says, ‘Lohm, mak mak.’ You are about to experience a Bangpra treat – putting on a line where the direction of the grain matches that of the slope – oh my Buddha!

All but two of Bangpra’s greens are sloped from back to front. About six of these have their grain following the slope, from back to front. In some such instances your putt will not stop until it is off the green. Playing long on these greens, such that your approach shot finishes well past the flag, is a no-no. Emerald also has many back-to-front sloping greens with grain going in the same direction. Putting or chipping from behind and above the flag on these holes can easily ruin an otherwise good round.

The same is also true of many other courses we play. A few years back, Mountain Shadow’s greens used to be regarded as without peer in terms of pace and purity. It was said that if you won at Mountain Shadow, you simply had to be a good putter. I suspect most of us won’t have experienced putting on a course with a stimpmeter rating of 10 or greater. The USGA for example, following measurements taken across the US, issued these recommendations:

For the US Open – the only major they control – they recommend:

Come tournament time in April, the Masters at Augusta regularly set their greens at a pace around 13 feet. Together with the Oakmont Country Club, these two courses are reckoned to have the fastest greens in World Golf. I once played a tournament on greens that were rated at 12, and believe me it was scary. That experience showed up flaws in my putting stroke that I never knew were there.  That was when I learnt how to read greens. Today the flaws remain, but I can sure as hell read greens.

Some courses actually state the daily stimpmeter reading of their greens. Crystal Bay posts theirs on the notice board immediately outside the locker rooms. In good conditions, they will often show a reading of 8.5, making them a touch faster than most greens around Pattaya. So, what is the stimpmeter for a Bangpra treat, such as the hypothetical putt facing us on the 6th?

I don’t know. Neither does anybody. Stimpmeter readings for a green are the average of three rolls done one way, and three done in the opposite direction, thus won’t apply to our downhill/down-grain monster. At a guess, I would estimate that on some days it could be the equivalent of 13-15.

The difficulty is enhanced when the return putt is attempted as it is likely to be so bloody slow, that it is near impossible to bring yourself to hit the ball anywhere near hard enough for it to reach the hole, let alone go in.

So, what to do? We will return to this shortly.

The break is the amount a putt moves from right to left, or left to right, on a green. How much will be determined by slope and grain and very occasionally, wind. Slope, the angle between your ball and the hole, is obvious to the naked eye. Grain is not. Grain can be determined by the following:

So much for determining how to read grain. Have you got all that? Good. You can apply it to your home courses, because that is where they mostly apply. There is only one sure-fire way to read grain in Pattaya – look at the bloody hole!

I would be a rich man if I was given a twenty-baht note for each time a playing partner has made some comment when I have walked up and looked into the hole prior to my first putt, or if close to the green, before I chip. Even on courses I know well, I still take a peek. It tells most of what I want to know. Next time you’re on the course, check out the hole for yourself. Look at the inside rim of the hole – the cut-line where the edge meets the surface of the green. You will notice one-third of the hole’s circumference is ragged. Directly opposite this point it is smooth by comparison. What you are seeing is the direction in which the grass is growing. The ragged look is caused by the grass’s tendency to grow and fray. If your ball is on the same side of the hole as this rough and ragged portion, you are putting into the grain. If your ball is directly opposite, on the smooth-cut side, you are putting down-grain. Use the practise putting green for confirmation. Then use your hand to feel the surface and compare the feeling of sandpaper to glass. Having done this, it is easy to realise the effect that grain will have on speed of putt.

When putting cross-grain, expect the ball’s route to be influenced by the direction of the grain, especially in the absence of slope.

Tell-tale signs around the hole at some courses may not be as obvious as others. If you can’t tell by looking at the rim of the cup – and I would be surprised – check the fringe – the grass on the edge of the green. Sometimes the grass on the fringe is sufficiently long where you can see the direction of the grain simply by looking at it. This method works best mid to late afternoon, whereas the rim of the cup can tell all from early in the day.

Let’s now go back to that putt discussed earlier – the Bangpra treat. The one thing you don’t want is to be short as that could lead to a four-putt. I doubt whether it’s possible, but being short on such a putt is the worst possible outcome. The next point is don’t change your putting stroke. The speed of your putt should be determined by two things – the length of your back-swing and where on the putter-face you hit the ball.

All putts, whether uphill, downhill or sideways, must be hit with an accelerating putter-head. If faced with a particularly fast putt, where you simply want to get the ball started on line, you can hit it following a short back-swing, or instead of the sweet-spot, use the toe of your putter. Whatever method is chosen, it is still a hit. Never use a decelerating stroke.

You’re looking over your 25-footer, downhill and down-grain, thinking how do you get this ball to stop? The blunt truth is you probably can’t, so try not to worry about it. Just ensure you do not leave it short by any distance greater than 18 inches. Using the toe of your putter does have a dampening effect, but practise it first. Personally, when faced with this type of putt, where length dominates line, I focus solely on the feel of my right hand giving the ball a gentle tap. Normally, my hands apply equal pressure in my putting stroke, but not when putting downhill and down-grain. As with putting generally, it is whatever works best for you. There is no right or wrong way regarding grip, stance or swing, so long as the ball is struck squarely with an accelerating putter-head.

Having worked out the direction of grain and its likely effect on your putt, you are left with determining the answers to two simple questions – what is the best track for the ball to take and how hard do you hit it? Line and length in other words. Here the experienced caddie can be a real bonus, but you need appreciate how to interpret what he/she says. Caddies will tend to underestimate break. E.g., if she says ‘Three cups left,’ I would add another cup if a medium length putt, and double it for a longer putt. This assumes your pace would have the ball dying at the hole.

When caddies add the words ‘Mak mak,’ to a term, such as down or up, they really mean ‘a hell-of-a-lot.’ And they are generally correct. Watch out for terms used such as ‘Ha-sip, ha-sip,’ which means fifty-fifty. It could mean she doesn’t know, but doesn’t want to lose face by saying as much. This face thing can also play a part in the quality of advice you get as often times giving the golfer a wrong steer is considered preferable to admitting she doesn’t know. And don’t think you can get round this by telling her she doesn’t need to come up with an answer if she doesn’t know. It doesn’t work that way. Not unless you have developed a relationship over many rounds. TIT.

Effective putting in Pattaya is absolutely dependent on reading greens correctly. A major part of this is to determine grain direction and the effect it has on line and length, particularly length. Achieve this and your total putts per round will drop. How sure am I of this claim? Ha-sip ha-sip.

Born in Wellington, New Zealand over 60 years ago. Introduced to golf - Thailand style - in 2004 and never recovered. I believe Thailand, Pattaya particularly, offers a unique and wonderful golfing experience for all golfers, whatever their handicap. If I can help embellish that experience, I will.
View all posts by golfnutter →
This entry was posted in Putting in Pattaya. Bookmark the permalink.

1 Response to Putting in Pattaya